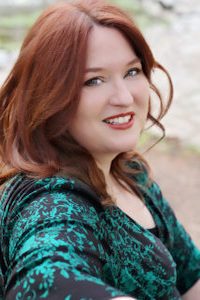 Song for a Whale began with a Twitter search that serendipitously led Lynne Kelly to “The Loneliest Whale in the World.” This real whale sings at 52hz; “a frequency much too high for other whales to understand.” The lonely whale sings but never gets a response. As a sign-language interpreter and educator, Kelly resonated with the plight of the whale. After diving into the quiet world of this unique whale, Kelly rose to the surface with middle-school suspense novel about a twelve-year-old deaf girl named Iris and a whale with a song no whale can hear, Blue 55, In a sea of hearing classmates, Iris feels isolated and voiceless among them but she thrives in the “world of wires” and electronic devices. When she learns of Blue 55, her purpose becomes clear and she embarks on a perilous journey from junkyards of Texas to the cold shores of Alaska in an attempt to write and communicate one of the most profound songs ever written to a whale.

This is Lynne Kelly’s second novel. Her first, Chained, also explores the bond between child and animal. Currently available in three different languages, Chained tells “The story of a boy and an elephant who have a friendship stronger than any lock, shackle, or chain.” 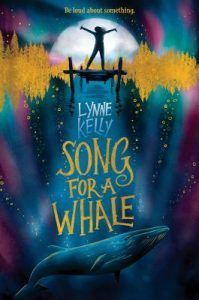 Ten-year-old Hastin’s sister has fallen ill, and his family must borrow money to pay for her care in the hospital. To work off the debt, Hastin leaves his village in northern India to work in a faraway jungle as an elephant keeper. He thinks it will be an adventure, but he isn’t prepared for the cruel circus owner. The crowds that come to the circus see a lively animal who plays soccer and balances on milk bottles, but Hastin sees Nandita, a sweet elephant and his best friend, who is chained when she’s not performing and punished until she learns her tricks perfectly. With the help of Ne Min, a wise old man who seems to know all about elephants, Hastin protects Nandita as best as he can. Still he wonders–will they both survive long enough to escape?”

When not writing, although she is currently excited about having more time to write, Lynne Kelly continues to educate and empower students about language through writing and sign. Kelly discovered her passion for ASL and writing novels for children after she took a few sign language courses at an East Texas college while completing her BA in Psychology. For a few years, she worked as a special education teacher. “I’ve always loved reading, but it was during those teaching years I fell in love with children’s literature all over again and became interested in writing, so there’s nothing about that I’d change.”

To that end, Kelly regularly visits schools, reader groups, and workshops to provide encouragement and education about the writing/publishing process.

The Unteachables is a redemption story of a burnt-out middle school teacher and a class of castaways. Once a praised and influential teacher Mr. Zachary Kermit has fallen from grace after a cheating scandal shattered his career over twenty years ago. After spending years carelessly teaching under the shadow of the scandal, he’s finally within a year of retirement when the school assigns him the task of teaching the unteachables. Conversely, the Greenwich Middle School students in room 117 have been shoved into the fringes of Greenwich’s social and academic ecosystem.

However, “the Unteachables never thought they’d find a teacher who had a worse attitude than they did. And Mr. Kermit never thought he would actually care about teaching again. Over the course of a school year, though, room 117 will experience mayhem, destruction—and maybe even a shot at redemption.”

It was chosen as Barnes and Noble’s Book of the Month for January 2020 and made the New York Times Bestsellers Monthly list for February 2020. 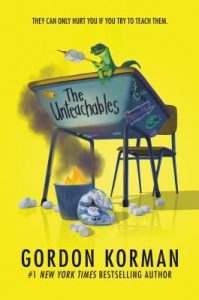 Korman has written over ninety books for kids and teens which have been sold over 30 million copies and translated into 32 languages. But his writing career all began in the 7th grade with a track field coach who had to teach English at Korman’s school. “For creative writing, he gave us total freedom to work on whatever we wanted for the rest of the year.” Four months later that year, This Can’t Be Happening At MacDonald Hall was completed.

As the class monitor for Scholastic Book Orders at his school, Korman took a chance on sending his manuscript to Scholastic. “Full disclosure: my mom had to type my book for me,” Korman admits. But it worked! Scholastic published This Can’t Be Happening At MacDonald Hall, his first novel, while he was a freshman in high school.

Korman makes regular appearances at schools, libraries, and bookstores. Fans and curious readers can engage with him in the Reader’s Forum on his website where he happily answers questions about books and writing.

Song for a Whale (Paperback)

In the spirit of modern-day classics like Fish in a Tree and Counting by 7s comes the Schneider Family Book Award-winning story of a deaf girl's connection to a whale whose song can't be heard by his species, and the journey she takes to help him.

Song for a Whale (Hardcover)

In the spirit of modern-day classics like Fish in a Tree and Counting by 7s comes the Schneider Family Book Award-winning story of a deaf girl's connection to a whale whose song can't be heard by his species, and the journey she takes to help him.

A hilarious new middle grade novel from beloved and bestselling author Gordon Korman about what happens when the worst class of kids in school is paired with the worst teacher—perfect for fans of Ms. Bixby’s Last Day. A good choice for summer reading or anytime!

A hilarious new middle grade novel from beloved and bestselling author Gordon Korman about what happens when the worst class of kids in school is paired with the worst teacher—perfect for fans of Ms. Bixby’s Last Day. A good choice for summer reading or anytime!

The amazing New York Times bestseller about what you can do when life gives you a second chance.
Chase's memory just went out the window.

A quirky homeschooled kid must learn how to fit in (or stand out) at public school in this heartwarming fish-out-of-water novel for kids.Capricorn Anderson had never watched a television show before. He'd never tasted a pizza. He had never even heard of a wedgie.

From #1 New York Times bestselling author Gordon Korman comes a hilarious and heartfelt novel in which one middle-school troublemaker accidentally moves into the gifted and talented program—and changes everything.

The first book in the action-packed trilogy from New York Times bestselling author Gordon Korman is perfect for fans of Stranger Things and James Patterson.

From the bestselling author of Swindle and Ungifted comes the funny, fantastic story of an underachiever who ends up achieving much more than any overachiever could ever imagine.

From the bestselling author of Swindle, Restart, and Slacker is another hilarious story about an underachiever who learns to go above and beyond.

A fun, funny ghost story about a nobody kid who becomes a somebody while helping a ghost right a wrong from the past.
Cooper Vega's family moves so often that he's practically invisible at any school he attends. Now they've relocated to the town of Stratford -- where nobody even makes an effort to learn Cooper's name. To them, he's just . . . whatshisface.

This funny and heartwarming sequel to Ungifted, which has become a word-of-mouth hit, cleverly sends up our ideas about intelligence, heroism, and popularity. This middle grade novel is an excellent choice for tween readers in grades 5 to 6, especially during homeschooling.

The Man With The Plan and his friends return in this fifth romp in the Swindle series -- now in paperback!
HIDEOUT: a place to escape detection, especially when being chased by someone determined to have revenge . . .

UNLEASHED: freed from restraint, running wild, not being held back by anyone or anything . . . Don't miss the latest Swindle mystery from #1 New York Times bestselling author Gordon Korman.

Is it a gift . . . or is it a curse? Jax Opus can use his color-changing eyes to make people do things they don't want to do. (Only his color-blind best friend, Tommy, seems immune.) At first, Jax doesn't know what he's doing -- temporarily hypnotizing friends, foes, and strangers. But then his power pushes things way too far, and his secret isn't a secret any longer.

The sequel to Gordon Korman's SWINDLE---the Man With A Plan is back!